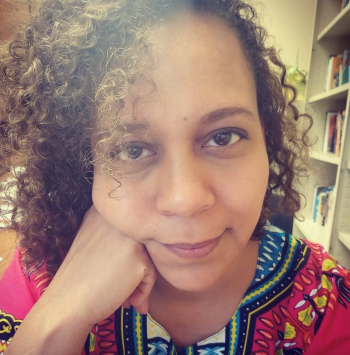 I was a senior in high school when my teacher assigned a short story by Alice Walker called “Everyday Use.” It is the first time I remember reading a piece by a non-white writer in an educational setting and the discussion of that text would forever change me as a reader. That short story prompted me to visit the school library and find some other work by Alice Walker, who I discovered was also a novelist. The only book the school library had was The Color Purple, which I read even though I’d already seen the film. I was amazed to discover how different the book was from the movie and determined that I would read all of Walker’s work. That year for Christmas, I asked for every book by Walker my mother could find. To say that I became obsessed with her is an understatement. I researched everything I could about her life and discovered she was from Georgia, like me. Though I was raised as a Christian, as I grew into my own thoughts I found myself with questions. I was drawn to meditation, to yoga, to West African and other Eastern forms of spirituality and without Walker’s work, I may have been more afraid to explore these practices and ideologies. I  became a vegetarian and started to think about the kind of person I wanted to be; Walker’s work also allowed me to reflect upon my own childhood traumas. I discovered that she had, at least for a time, attended Spelman College in Atlanta, GA. I had planned to attend Smith or Grinnell, but after learning that Walker went to Spelman, it shot to the top of my list. Attending Spelman College, an institution that is a historically black college, was one of the best decisions I’ve ever made and I owe the circumstances that led to that decision in no small part to reading the work of Alice Walker.

Upon acceptance to Spelman, all freshman receive a reading list of works we are to have read before we arrive for freshman orientation week. On that list was Zora Neale Hurston’s Their Eyes Were Watching God. Having been a voracious reader since at least the 3rd grade, I was excited to receive this list from the college. I devoured all the texts there but Hurston’s novel moved me most of all. It was the first book I ever remember reading that made me cry. When Janie shoots Teacake because he has rabies, I was moved in a way I did not expect. When I declared a major of English my freshman year of college, it was because I wanted to spend the rest of my life reading the work of people like Hurston and Walker. Spelman opened the door to many other writers—from Ntozake Shange to Toni Morrison–whose work I read with keen interest and a sense that the words on the pages of these novels and poems and plays had something very specific to say to me. And though I did not anticipate becoming an English professor during all of high school and most of college, it seems in hindsight that it was my destiny. I can remember praying, when I was in the 5th grade, that one day I get a job that paid me to read. Miraculously, my dream came true.

These early reading experiences shaped, and continue to shape, my career as an academic. I knew that I wanted to undertake a deeper study of African American writing in graduate school and I knew that I wanted to amplify my own experience of transformation which was first triggered by reading Alice Walker. James Baldwin famously said that, “You think your pain and heartache are unprecedented in the history of the world, but then you read. It was books that taught me that the things that tormented me most were the very things that connected me with all the people who were alive, who had ever been alive.”  Reading, especially in the context of Ethnic American Literature, can show us that our own suffering, which we assume is so private and particular to us, is part of the human experience. Reading these black writers that I was so drawn to allowed me to make sense of my difference—however that iterated itself—and showed me that I do not walk any path alone.

The first year I was at Spelman Alice Walker came to Atlanta and did some readings from her new book, Possessing the Secret of Joy. I attended one of these readings at a local church, The Shrine of the Black Madonna. Everything about that moment was a harbinger of the life that was coming into being for me. Can a black girl, cramped into boxes of American racism and sexism, made to feel as if she is nothing and has no value, come to recognize that as the lie it is? Sitting within the glow of Walker who read beneath the mural of a Black Madonna, the answer is yes. After the reading, people lined up to get Walker to sign their books. Many people brought all of their books authored by her to sign. (This, even then, was a lot of books.) I stood in line with my one book, the new book. I noticed that she looked exhausted. I stepped out of line and decided not to add to the burden. I told myself that one day, I would get to meet her. I had simply wanted to shake her hand and look into her eyes, more than I wanted her to sign my book. So I left, feeling certain that one day our paths would cross again.

In a way, every time I teach Walker’s writing—or the writing of any author I love—our paths cross. Teaching now at a predominantly white institution, I bring the work that shaped me so formatively into the classroom as much as I can. I have come to love black writing and the canon of African American literature the way one loves one’s ancestors, because within that work lies salvific potential for anyone who reads it. The insights contained in the diverse and voluminous field of ethnic American literature are ones that are almost always revolutionary, both personally and politically, in their import. Consider, for example, the way Baldwin lays bare the internalized torment at the heart of anti-blackness and racist violence in the short story “Going to Meet the Man.” His focus here isn’t just to show how painful racism is for black people, but to show too that the white man in the story, Jesse, is a broken human being. Thus his beating of the black man in the story is a projection of his inner brokenness. This taught me a lesson about hatred I have never forgotten and which has supported me through some of the most painful incidents of racist violence. It comes back to me when I think of George Floyd or Trayvon Martin or Breonna Taylor; it reminds me repeatedly that black people suffer not because they are black, but because of an unacknowledged brokenness within their torturers. Baldwin shows, throughout his work, that only broken people can perpetuate racist and homophobic violence. Thus, I impress upon my students that ethnic American literature is not “just” for people of color; black writing is not “just” for black people. Black writing, as much as the writing of Emily Bronte or William Faulkner has something for me as a black woman, has something for the non-black reader too.

A few years later, when I was graduating from Spelman, I learned that Alice Walker would be the keynote speaker. That year, I’d won an award she sponsors for Spelman students—the Zora Neale Hurston/Langston Hughes writing award. So, I got to ride in the car that picked her up from the airport. She was kind and quiet and she held my hand. My dream of meeting her, of looking into her eyes and of spending some brief time with her, had indeed come true. I owe the life I now have, a life I could not have imagined for myself as a child, to the works I was fortunate enough to have read in my formative years. The gift that these writers gave the world in their work continues to shape who I am as a person and informs what I bring to the classroom. I believe that the power of black writing, and of ethnic American literatures largely writ, shapes us all regardless of our racial identification. I see within black writing, and ethnic American literature, an invitation to insight and transformation of ourselves and our world. Like Ralph Ellison, I believe that the extraordinary value of this literature is its ability to show us all something about the history and persistence of racialized structures in and on our lives. Thus, like Ellison, I extend an invitation to all people to read black writing because, as he writes at the end of Invisible Man, “Who knows but that, at the lower frequencies, I also speak for you?”

Stefanie K. Dunning is an Associate Professor of English at Miami University. She is a graduate of Spelman College and the University of California, Riverside, and a Ford Fellow. Her first book, Queer in Black and White: Interraciality, Same-Sex Desire, and Contemporary African American Culture, from Indiana University Press, was published in 2009. Her latest project, Black to Nature: Pastoral Return and African American Culture, from the University Press of Mississippi, is forthcoming in May 2021 and available for pre-order. She also has a podcast, called Black to Nature: the podcast, available for listening on all major platforms..