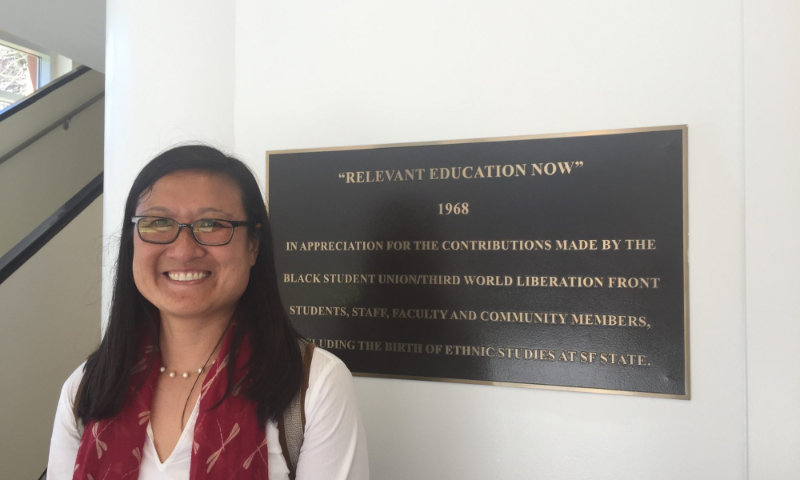 Like many people who have pursued a PhD in English Literature or related fields, I was a precocious reader. Among my earliest memories are reading with my parents and sounding out words, matching them to the letters that accompanied the pictures in the books they read to me. By the time I was in first grade I was reading chapter books and by the fifth grade I had read John Steinbeck’s East of Eden, a book that continues to be among my favorites. I grew up the child of Chinese immigrant parents in a home that was working class and then eventually middle class when my mother went back to work once I became old enough to watch my younger brother. Thankfully both my parents were avid readers and took my brother and I to our local public library every Saturday morning. We checked out the maximum number of books that we could for the week, returning armloads the following Saturday and starting the cycle of books we’d read for the week anew.

Being an avid reader gave me aspirations to be a writer—specifically I wanted to write the kind of novels that transported me into different eras and realms. Along with canonical writers like the aforementioned John Steinbeck, in my K-12 years I consumed the novels of Louisa May Alcott, Laura Ingalls Wilder, Jane Austen, Charles Dickens, Robert Louis Stevenson, Nathaniel Hawthorne, F. Scott Fitzgerald, and Ernest Hemingway, among others. Some of these were assigned in school, others I discovered and devoured on my own. So it’s no wonder that when I thought about becoming a novelist, I thought I had to write under a pen name. Specifically, one that hid my Chinese American identity. I recall being thirteen and going to where the H’s were listed in the fiction section, where I would find the section beginning “HO,” except that instead of stopping there, I’d continue to where a book written by “Jacqueline Hope” would one day exist. Jacqueline Hope: that’s the pen name my pubescent-self picked, believing it sounded sophisticated and cosmopolitan. Of course what it sounded was White.

It wasn’t until 1989, in the winter quarter of my 1st year at UC Santa Barbara that I read a novel written by an Asian American writer, Maxine Hong Kingston’s The Woman Warrior. It is no exaggeration to say that this class and that book changed the course of my life. For the first time, I was reading about experiences that mirrored my own. For the first time I was reading a book written by a Chinese American woman who also grew up the child of immigrant Chinese parents, who also struggled with issues of fitting into US American society and norms. For the first time someone was describing a life and a world that fit into my own conception of what it was like to be Chinese American. I had not seen myself reflected in literature until I was nineteen years old—and reading this work of Chinese American literature led me to Amy Tan’s The Joy Luck Club, Laurence Yep’s Dragonwings, Louis Chu’s Eat a Bowl of Tea, and a future career as a professor of Asian American literary studies.

I was fortunate to come-of-age at a moment when Ethnic Studies was gaining momentum in California—in 1989 UC Santa Barbara was one of only three universities in the nation that had an Asian American Studies department. I took multiple courses in not just Asian American literature but Chicano, Black, and Multiethnic Literature, offered through both the English department as well as the specific Ethnic Studies departments that UCSB was fortunate to have. I was mentored by faculty like Shirley Geok-lin Lim, a scholar and poet of renown, and graduate students like Wei-Ming Dariotis, now a professor of Asian American studies at San Francisco State University, admittedly the mothership for Ethnic Studies in the United States.

And here’s where I want to talk about the different bodies we encounter in literary studies, because bodies matter, whether we’re talking about actual flesh-and-blood bodies of authors or readers or the body of literature that we encounter in our K-12 education, in our public libraries, that we assign in our college and university classrooms, and that we choose to focus on in our scholarship, research, and writing. My body matters—my Asian American cis-gender female, non-disabled-for-the-time-being body is being read by other people, whether I want them to read my body or not. It matters that you have seen the photo that has accompanied this blog post. Because there will be certain assumptions that you are going to make about me based on what I look like—assumptions that this post is either confirming or confounding. It mattered, very much, that I was able to read a work of Chinese American literature at a formative moment in my life—and that the class in which this was assigned was taught by a Japanese American female instructor, who was also my first non-White instructor in a humanities class (I had a Japanese American female trigonometry teacher in high school—but math was never going to be in my future and my keenest memory from that class was getting removed after I couldn’t stop laughing at a joke my best friend told me about a dead iguana in a tree—trust me, it was hilarious but you had to be there).

And this is perhaps the most important thing to think about in how reading shapes us: reading shapes our understanding of what it means to be human. If we are only reading works that have for too long been deemed “canonical” we are reading about the past and not the present. If we don’t read works deemed “ethnic literature” we are missing out on the humanity of over half the globe. So it matters when we assign works of non-White writers in our class. And I guarantee it will matter to your students, whatever racial or ethnic identity they have—because it mattered, and still matters, to me.

Jennifer Ho is Professor of Ethnic Studies and Director of the Center for Humanities & the Arts at the University of Colorado Boulder. Among her publications is her co-edited collection Narrative, Race, and Ethnicity in the United States (with Jim Donahue and Shaun Morgan). She is working on a breast cancer memoir and tweets @drjenho.